Cecilia Garcia Amaro was born in Guadalajara, Mexico, in 1953. In the 1960's, she with her family settled in Monterrey, Nuevo Leon, where she studied interior design at the Superior Institute of Art and Culture. Amaro moved to Tijuana in 1980, and this is where she developed her talents not only in the visual arts, but in the musical realm as well. Her first art exhibition was in the Disarte Gallery in Tijuana, Baja, California where she performed her song entitled "Canto Sobre Papel"¿"Song Over Paper".

Cecilia Amaro has become an icon in her native Mexico, where her art hangs with three of this country's greatest muralists, Rivera, Siqueiros and Orozco, in the elite collection of Mexico City's Industrial Club. Amaro has also displayed her work in more than 60 art exhibitions, at such prestigious venues as T.V. Asteca Tijuana and the Mexican Embassies in both Los Angeles and San Diego.

What makes this artist so special is that in her exhibitions she combines her beautiful artwork with poetic and musical interpretations. Amaro's strong yet sensitive paintings reflect a rhythm and freedom that can be also found in her music and poetry. It is truly rare to have the opportunity to "read, listen and see the expressions of an artist". Cecilia Garcia Amaro's warm, creative and generous spirit expressed in her work transcends all geographical boundaries worldwide. 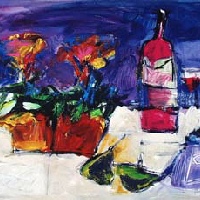 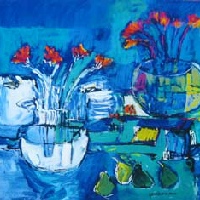 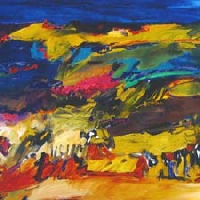