Considered a child prodigy, Armand began expressing his talent on canvas at the age of four. His mother, an eminent musician, and his uncle, a respected art professor, discovered his talents at an early age and nurtured and encouraged his skill. This eventually led to an appointment to the world-renowned Ecole Des Beaux-Arts of Paris for further studies.

Armand's work was so highly regarded by school administrators that standard prerequisites were waives. While there he received high honors in Fine Art. He then headed into the field of architecture, earning admission to the prestigious Ecole Superieure Des Modernes, where he received further acclaim for his design excellence. .

After graduation, this multi-faceted artist toured the Middle East and Europe as an architectural designer where he created functional structures of exquisite beauty. He then moved to Milan, where he put to use his considerable artistic talents, attracting a large patron base, both locally and internationally.

His technique of oil painting, while mixing styles of antiquity with modern impressionism, creates a unique blend of past and present, resulting in sensational elements rarely seen in art today. The influence of architecture on his artistic style can be seen in curvilinear composition, structural balance and harmony.

The command of six languages, the talent of a virtuoso guitarist and the skill of an architectural designer have come together in the artist. His latest achievements have included a series of paintings in churches, including the Church of St. Mary of Petersburg in Palos Heights in Chicago. Other church exhibitions have included the Church of St. David in Boca Raton, where he did the painting over the altar. He also recently included paintings in the Church of St. Mary in Toronto, Canada. These paintings are very rich, renaissance-style, embellished beautifully in his trademark gold leafing techniques. These works of great beauty will be preserved for years to come, and exhibited for all to enjoy and cherish. 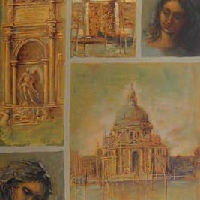 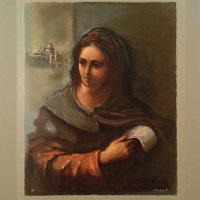 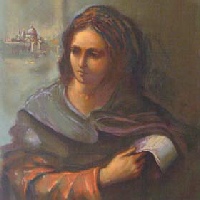