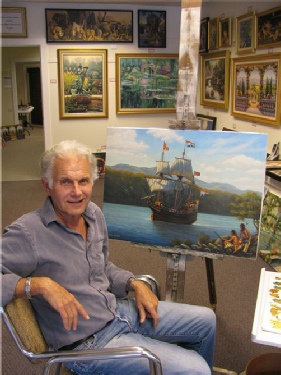 John Zaccheo is one of the world's most renowned impressionists. His professional accomplishments include being selected to create the official painting for the signing of the peace treaty between Israel and Egypt as well as making the official painting of the original landing on the Moon, which was presented to astronaut, Neil Armstrong. Zaccheo's works have also appeared on the cover of Life and Time magazines.

John Zaccheo's Italian heritage and love for Italian scenery come to life in his inspirational paintings. Zaccheo finds the inspiration for his works in the memories of the Mediterranean villages he has come to love. Few will ever experience the world as Zaccheo has, unless they step into his paintings and make believe.

Painting with passion, Zaccheo uses his palette knife to create such scenes shrouded with mystery, bathed with lavenders and blues, while retaining alluring shadows. His works have been referred to as more lush and picturesque than nature's own handy work since he manipulates colors and forms to improvise each other and enunciate natural harmony.

His paintings, rich in texture, capture a sense of light that magnifies forms and changes their appearance. His colors, so smoothly interconnected, seem to be but a single movement. These luminous scenes are a reflection of his travels to 36 countries, from places as exotic as the South Sea Islands to the remote upper Amazon River. His unique approach to art is to open a creative vein and unleash fond preserved memories onto canvas.

Years later, Zaccheo rose to become the head of Creative Services at Warner Bros. Music in New York, churning out album cover art. He also did commission work for influential patrons, gaining a wide client base as well as the interest of local galleries. 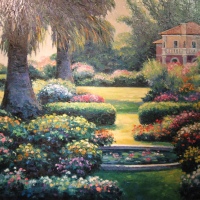 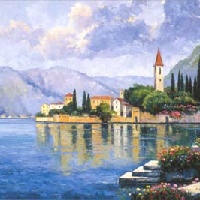 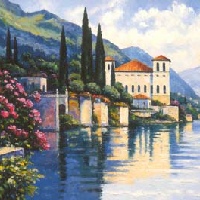